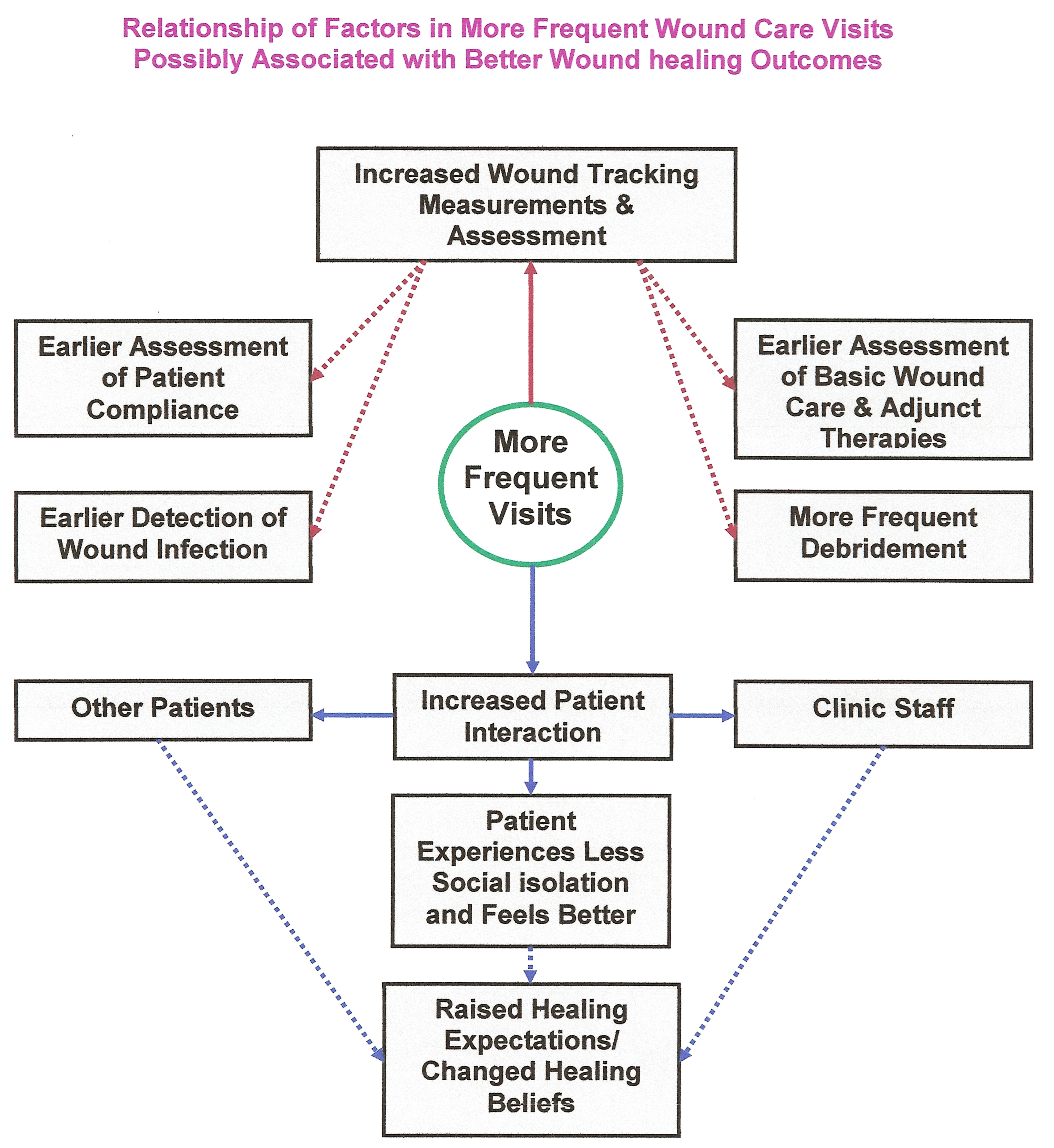 The Quantum Physics of Wound Healing

I decided to call the next few blogs “The Quantum Physics of Wound Healing” due to a discussion at a recent symposium hosted by Boston Biolife  over a glass of wine. Yes, it’s a buzz word. But we will eventually be delving into quantum physics also, that much I promise you.

I have long been fascinated by the prediction of wound healing. Well over 15 years ago Dr. David Margolis and his colleagues told us—and still tell us today—that simpler models are better, that starting with initial wound age and area and a grading of the severity of the chronic wound is all we really need [1,2]. In other words, predicting whether a wound will heal at a specified point further in time is relatively straightforward. So, why is there still so much debate about the subject? The simple answer is that while Margolis and his colleagues certainly did their homework, their approach rests on the premise that with certain caveats, what you cannot observe cannot make much a difference if it doesn’t change outcome estimates that much. In their words: “With the exception of wound grade, the unadjusted versus fully adjusted effect estimates did not differ by 10%, indicating that the unadjusted estimates were not confounded by the other risk factor variables” [2]. We have since learned that use of change-in-estimate criteria with a fixed cutoff level (e.g., 10%), have been found inappropriate [3], which makes meaningful modeling very much harder. But there is another problem, and it’s a big one, and hard to assess in a paper when it’s not reported.

When statisticians model data, they keep one eye on what is called goodness of it. You can think of this as a way to assess how the model you are building fits the data.  Allison describes this nicely by saying “There are two very different approaches to answering this question. One is to get a statistic that measures how well you can predict the dependent variable based on the independent variables”—in other words, predictive power—“The other approach to evaluating model fit is to compute a goodness-of-fit statistic.” In addition he points out that what goodness-of-fit statistics are testing is not how well you can predict the dependent variable (which in our context would be whether a wound healed or not), but whether you could do even better by making the model more complicated, specifically, adding non-linearities, adding interactions, or changing the link function. Most important are what are called the classification statistics. In logistic regression in wound care, this would be how the model predicts whether wounds heal or not using a simple 2×2 table:

Based on many years of modeling what I have found is this: it is far easier to predict which wounds won’t heal than will heal. In fact as the model gets more complex the trade-off becomes more one-sided with accuracies of 90% or better predicting wounds that won’t heal but often accuracies of less than 50% predicting wounds that will heal. (That’s worse than predicting by chance based on the flip of a coin.) This is quite a paradox and illustrates at least to my mind that there is a huge piece of this jigsaw puzzle that we don’t see and in the minds of some wound care researchers perhaps don’t want to see because it involves the “soft underbelly” of science. We will come back to this in a bit but let’s move on to clinic visit frequency first.

Based on preliminary work with the late Dr. Bob Warriner and (the still-living) Jim Wilcox, using relatively small numbers of Healogics clinical site data we observed that for patients with either diabetic foot ulcers (DFUs) and venous legs ulcers (VLUs) the more frequently patients were seen at a wound clinic, the faster their wounds healed [5]. Although I had reservations about these results (these were small numbers and somewhat cherry picked), I started including visit frequency in my modeling of chronic wounds. After a couple of years of doing this I became convinced it was a real phenomenon and the issue then began how to explain it. My dialogue with Dr. Caroline Fife on the subject resulted in much insight and we published the study early this year [6].

The model we developed and reported was fairly complex and would be what we call “suitcase” plus treatment—in other words, variables we learned when we first saw the patient and his or her wound and other treatments that were given until the wound healed or it became right censored (lost to follow-up due to death, hospitalization, or patient transfer to another facility). In trying to understand how big the effect was we used a dividing point of 2 or more visits per 4 weeks or less. The dividing point appears to be a frequency of every 2 weeks. In other words, if we a see a patient with a diabetic foot ulcer at a frequency of less than twice a month, it’s like falling off a cliff—the wound never heals. Conversely, if we see the patient much more frequently, the wound trajectory accelerates toward healing.

We don’t really know why patients seen more frequently at wound care clinics should have a much higher probability of healing because no prospective studies have been conducted on the subject. So, we hypothesized based on what is known on the wound care literature. While some of these things might seem obvious (if you see a wound more frequently one can generally be more pro-active and deal with things like infection much sooner), but some are not; for example, if a patient has had prior negative experiences with wound healing, how can that collective experience affect wound healing? For one thing, it might make the patient very skeptical that wounds can be healed regardless of how competent and smart the wound care team is in treating her wound. But what does that situation really mean? Does it mean she is likely to be uncooperative but with a little help all could be well? Or, does it mean that her belief of non-healing actually affects the likelihood of her wound healing? From a scientific point of view the former seems quite reasonable but the latter suggests we have just crossed the line into a woo-woo world in which healing is less about how big and old the wound is and more about how an individual’s thoughts affect whether the wound is healed or not.

Yet that idea is not entirely without precedent. Consider the study conducted by Salomé et al (7): “Patients younger than 60 years reported significantly lower levels of spirituality and those older than 70 years had significantly lower hope for cure than other age groups.” (What’s going on between 60 and 70 years of age we wonder) “….Level of spirituality was significantly lower among women and those living with an ulcer for more than 2 years, who also reported significantly lower hope for cure compared with patients having an ulcer for less than 2 years.” The investigation also cites and discusses several other studies that had similar findings. So, whether we call it hope, belief, or another term, it is something that the patient appears to carry with himself that at the very least is the sum of prior and current experience with a portion of it undoubtedly wound-related. Although in our paper we confined our speculation to the more conventional processes that might affect wound healing, the analysis could certainly be carried further, if we knew what kind of data to collect and analyze. And that is the conundrum.

We’ll go down this rabbit hole much deeper next time as we continue to explore the quantum physics of wound healing. 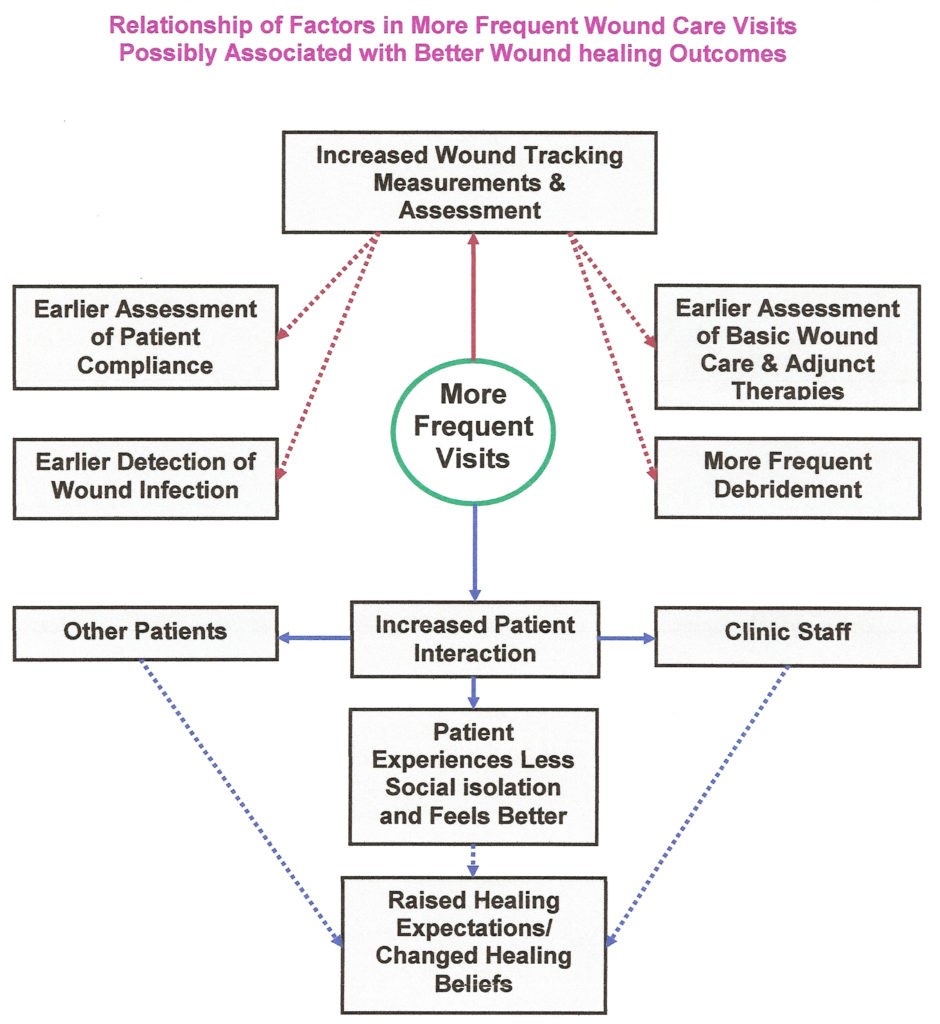 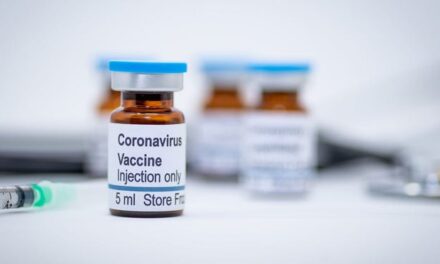