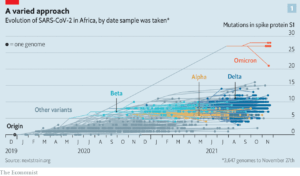 We’ve seen a lot of drama in the past few weeks with the rise of the Omicron strain. Some of it may turn out to be justified. This strain has an interesting lineage (Figure 1) that came from South Africa.

South Africa has been a source of other strains that never spread widely but the omicron strain is different: it has some 50 mutations of which 30 are concentrated in the spike protein. Speculation in the scientific community suggests that this may have originated in a severely immunocompromised patient (we have talked about this mechanism before). Regardless, this strain is rapidly spreading around the globe.

The two key points I want to talk about are (1) Since the virus appears to be far more fitter than the delta strain, does this mean that omicron might represent the exit strategy from our perspective (i.e., end of the pandemic); and (2) what is the penalty we’ll have to pay as a result?

The fitness of a virus is “the capacity of a virus to produce infectious progeny in a given environment.” In other words, the ability to infect individuals. Compared to delta, the omicron strain’s R0 is about 4 times larger (see p 85) according to Prof Hiroshi Nishiura, who models infectious diseases mathematically. How does it do this? It multiplies up to 70 times faster in the bronchial tissues but 10 times slower in the lungs compared to the delta strain based on research by Hong Kong scientists.

In theory this means much faster transmission and possibly less lethality. nference scientists in Cambridge, Massachusetts determined that insertion mutation 214EPE, which has never been seen before in SARS-cov2 mutations, could have come from something like HCoV-229E, a common cold coronavirus in which an individual was coinfected with both viruses. From an evolutionary perspective a virus that can spread many more copies of itself has a better chance of staying around, but in the process, it might well evolve into something less nasty. (Caveat: Not all viruses become less lethal as they evolve.) While I’m not saying this will be the last strain we will have to deal with, it’s hopefully another step on the path to the point where SARs-Cov2 will become a seasonal event, like flu strains.

The big question about the omicron strain is whether it’s less lethal than the delta strain and whether long-term issues will be less common. Reports coming out of South Africa have suggested that in term of hospitalization and mortality rates, the omicron strain was more benign than the delta strain. In addition, a private study from Discovery Health, South Africa’s largest private health insurance administrator, which released a real-world analysis of the Omicron outbreak based on 211 000 COVID-19 test results in South Africa indicated that two-dose vaccination still afforded significant protection from hospitalization and death, and that the strain was less lethal after adjusting for vaccination status. The two big caveats are (a) the risk of reinfection is much higher compared to previous strains in South Africa and (b) the seroprevalence of exposure to prior SARs-Cov2 is high—certainly much higher than most other countries.

The experience in the UK where the omicron strain is already becoming dominant in London, distilled by authors of a report from the Imperial college did not find a reduction in hospitalization rates or mortality, though it is likely to early to tell if this will hold up. Interestingly, vaccine effectiveness estimates against symptomatic omicron infection were determined to be 0% and 20% after two doses, and between 55% and 80% after a booster dose.

Finally, a Danish study came out a few days ago. From the data I was able to calculate a likely set of dates for dominance in the USA assuming that susceptibility rates would be roughly the same between the American and Danish populations. My results suggest a median date of the end of February plus or minus 2 weeks. This is a back-of-the-envelope calculation and not adjusted for anything. The report also shows that fully vaccinated people (no boosters) acquired the infection much more than unvaccinated people, a fact that anti-vaxxers have highlighted. This could be due to small numbers and several superspreader events amongst young vaccinated adults, but it is a finding that will need to be addressed.

I do think that the omicron strain represents a step along the viral evolutionary pathway that will end the pandemic ultimately.

In practical terms, if you have any travel plans or even elective surgeries, my suggestion is to get them done by the third week in January. Things are likely to get dicey after that but by summer will be getting a lot better. So, if you have travel plans for summer, keep working on them.

Last, after looking at all the data I plan to get my booster shot this week. I had been putting it off for several reasons (largely timing), but the timing is now good. If you haven’t got your booster, start thinking about it now. And, if you haven’t been vaccinated, good luck!

Guidelines for the End of the Pandemic