SARS-Cov2 Superspreaders: The Key to Controlling the Pandemic 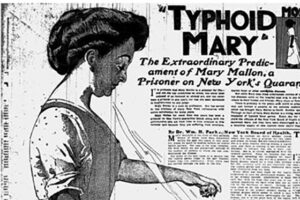 Mary Mallon, the superspreader of typhoid in New York

Most people of heard of Typhoid Mary, an unfortunate healthy carrier of typhoid who was probably singlehandedly responsible for infection of 3,000 New Yorkers in 1907. She was probably the most celebrated of a phenomenon called superspreading. The individuals responsible for such events are able to infect large numbers of people, probably because they carry high viral loads. They are also asymptomatic. How they figure into the current pandemic has become not only a scientific inquiry but a much-politicized problem because 40% of the US population either doesn’t care or does not think SARS-Cov2 is a problem.

Early this year there was a great debate regarding the value of R0 of SARS-Cov2. R0, you will recall, this is the basic reproduction reproductive number, estimated as the expected number of cases directly generated by one case in a population in which all individuals are susceptible to infection. But, it’s important know that R0 is an average. Mathematically it is calculated as , where beta is the infection producing contacts per unit of time and tau is the mean infection period. It doesn’t tell us about the whole distribution. Figure 1 illustrates this based on a hypothetical population of 100 infected cases. 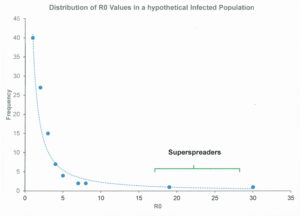 The curve is essentially a gamma distribution in which the dispersion parameter, k, tells how heterogeneous this curve is with smaller values meaning greater heterogeneity. When k is substantially less than 1 it approximates the fraction of infected individuals who give rise to 80% of infections. For COVID-19, which is believed to have a k value of about 0.1, this means that the most infectious 10% of individuals cause approximately 80% of infections. k varies considerably is a variety of infection diseases and Nielsen and Sneppen show this nicely in Figure 2.

Fig 2. The characteristics of superspreading. a) Simulated infection network characterized by superspreading, with a dispersion parameter k = 0.1, within what has been observed for COVID-19 [4, 5]. Superspreaders appear as hubs, while most individuals are “dead ends” meaning that they do not transmit the disease. The epidemic mainly grows by spreading from one superspreader to the next. b) The dispersion parameter k provides a measure of superspreading, with lower k values corresponding to a greater heterogeneity. With a k value of 0.1 for COVID-19, approximately 10% of the population has the infectious potential to cause 80% of transmission. SARS and MERS are also characterized by a significant heterogeneity, while pandemic influenza is believed to be more homogeneous. c) Simulated infection network without superspreading (all individuals have equal infectious potential). Here, most individuals spread the disease to a few others, leading to a branched structure. Figure courtesy of Nielsen BF, Sneppen K. Superspreaders provide essential clues for mitigation of COVID-19. medRxiv preprint doi: https://doi.org/10.1101/2020.09.15.20195008.

One of the largest observational studies to date of superspreading was conducted in two Indian states—Tamil Nadu and Andhra Pradesh—and involved data analysis of 84,965 infected individuals 575,071 of their known contacts, all of whom were tested for the virus. The results are fascinating: 71% of infected individuals did not go on to infect anyone else. But, 10% of the infected group caused 60% of new infections. Interestingly, same-age contacts were associated with the greatest infection risk.

Evidence is accumulating that superspreaders may in fact hold the key to the pandemic. As Nielsen and Sneppen conclude from their simulations (see Figure 3):

Clustering in this context means groups of individuals who spend time together. Susswein and Bansal in their extensive mathematical analysis come to similar conclusions (don’t look at the math but focus on the instructive diagrams).

Fig3. Epidemic trajectories as a function of the number of people that each person interacts with during an infectious period. a) Time evolution in the absence of any infection heterogeneity. b) Time evolution for a disease with dispersion parameter k = 0.1, roughly representative of COVID-19. Figure courtesy of Nielsen BF, Sneppen K. Superspreaders provide essential clues for mitigation of COVID-19. medRxiv preprint doi: https://doi.org/10.1101/2020.09.15.20195008.

A superspreading events might even be behind the the new SARS-Cov2 variant that’s currently causing havoc in the UK.

So, the bottom line is clear: if you’re going to ignore social distancing and get close to other humans without masking, do it with your own network or buddies; don’t hang out with large numbers of strangers!