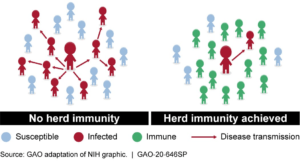 Pandemics are multi-year events that often go in phases. The 1918 flu pandemic had 3 distinct phases of which the second was the deadliest. I have some serious concern that April 2021 through March 2022 will follow that pattern if we don’t reach herd immunity this year.

With the exception of a few countries, vaccination is off to a slow start through a combination of vaccine shortages, piss-poor administration, inter-country squabbling, plant shutdowns, and the current focus on very rare (meaning like one in a million or so) deaths due to cerebral venous sinus thrombosis (CVST) coupled with extreme thrombocytopenia  (very low levels of platelets) that should not be treated with heparin. The latter issue has caused pauses with both the J&J and Astra-Zeneca vaccines in many countries while authorities grapple with how to proceed.  Current thinking suggests that the issue has to do with the vaccines having adenoviral vectors (the genome of the adenovirus has the modified target SARS-Cov2 spike gene spliced into their DNA) triggering antibodies to form and promote blood clots, since mRNA vaccines are not associated with CVST. The situation certainly has not been helped by aggressive media reporting.

The goal of vaccination is to reach herd immunity. This is achieved when the critical minimum proportion to be vaccinated (Vc) = 1-(1/R0). For an R0 of 3 this is 67%. However, since most vaccines are not 100% efficient, this bumps up the Vc requirement. We also need to replace R0 with Re, which is the effective reproductive virus number that is dependent on several factors, including the population susceptibility, the population density, and superspreading functions. Calculating Re also becomes challenging when different viral strains are present and the uptake of vaccines is unequal in different populations or geographic areas of a country.

What Happens if We Don’t reach Herd Immunity This Year?

Over the last 6 months we have seen the rise of third-generation strains that are much more infectious, and sometimes more lethal (or cause the subsequent illness to be more severe) because they are better at evading the body’s defenses. In some instances, prior immunity conferred from earlier strains is far less effective and, in a few cases, can provoke a more severe reaction due to the ADE phenomenon, which is akin to a runway immune reaction. The new strains include B117, which was responsible for the winter outbreak in the UK; B1251, which originated in South Africa; P1, which is still causing serious problems in Brazil; and now B1617, which is largely responsible for the serious situation in India. (This strain is worrisome because it has the double mutations E484Q and L452R in the spike protein.) All of these strains mean that we need a higher yet Vc because their inherent R0 is higher. Vastly more infections mean that the virus has more possibilities to mutate, and it’s possible we will see fourth generations emerging later this year that are even more infectious. Add to this the proportion of people who refuse to be vaccinated—some 20-30%—and recognizing that we are in a race against time because natural and vaccine-acquired immunity won’t last more than a year or two and you might realize that despite our best efforts this year, reaching herd immunity may turn out to be a pipe dream for most of the world, or even in the USA. And that, in turn, will mean the virus will be with us for many years.

With a few exceptions, we either knuckle down and get vaccinated, probably with booster shots every year for a while, or we let this situation spiral out of control. For all of you who say it is my right not be vaccinated, I understand and sympathize with your concerns, but you will end up being both the cause and recipients of prolonged suffering if we don’t reach herd immunity.

SARS-Cov2 Superspreaders: The Key to Controlling the Pandemic