We Should Be Very Concerned About the New SARS-Cov2 B.1.1.7 Strain 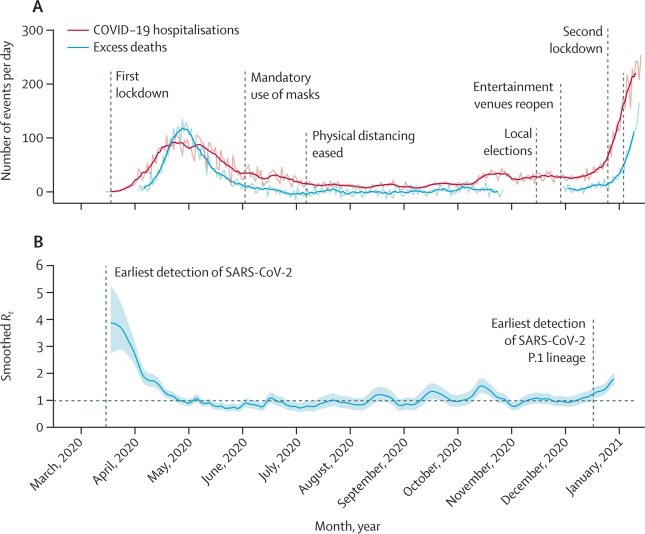 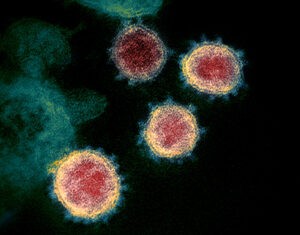 Most of you have heard by now of two new SARS-Cov2 strains that have come into play: The B.1.1.7 strain in the UK, which has caused chaos there and is rapidly spreading around the world, and the 501Y.V2 strain, which has emerged in South Africa. We will only cover the B1.1.17 in this post and analyze how its spread will affect things in the USA against a backdrop of increasing vaccinations, and a fast-increasing hospitalization rate with associated higher mortality due to the serious social problems we have regarding response to the pandemic.

The B.1.1.7 Strain
According to genetic analysis there are 4 sets of non-synonymous mutations/deletions associated with the Orf1ab, Orf8, N, and spike proteins. (Non-synonymous means that the result produced an RNA codon, which, when translated, would result in a new amino acid, or start/stop signal.) Many of these changes occurred in the spike protein, including N501Y, associated with an increase in ACE2 receptor affinity and increased infectivity/virulence in a mouse model, and P681H, one of the 4 residues comprising the insertion block that makes the furin cleavage site between S1 and S2 in the spike protein. Until now, we had never seen these two mutations together. Another prominent spike change is the deletion of 2 amino acids at sites 69-70, which has been often observed before, notably with the mink-associated outbreak in Denmark and the Y453F regional binding domain (RBD), as well as the N439K RBD mutation in humans, which can result from administration of neutralizing monoclonal antibodies and polyclonal sera from persons recovered from infection. (FYI: if you want to learn more about the nomenclature for mutations, click here.)

How did this this strain originate? Start by looking at Figure 1, which is regression of root-to-tip genetic distances against sampling dates, for sequences belonging to lineage b.1.1.7 (top) and the nearest ancestral phylogenetic tree (bottom). The lines show typical rates of genetic evolution over time (the Y axis is in units of genetic divergence). I drew in a blue line to show one possible jump. This line shows the molecular evolution moving at “lightspeed.” These kinds of jumps have been seen before in the SARS-Cov2 virus but they are incredibly rare and are typically associated with an individual who is immunodeficient or immunosuppressed, infected 1-4 months, and has been treated with one or more convalescent plasma treatments, or remdesivir. It should also be noted that convalescent plasma is frequently given when patient viral loads are high and intra-patient virus genetic diversity can increase following treatment. In other words, the patient becomes a viral bioreactor. Remember that we speculated that might have occurred in the case of the miners in the Yunnan caves when we were exploring the origins of the virus. 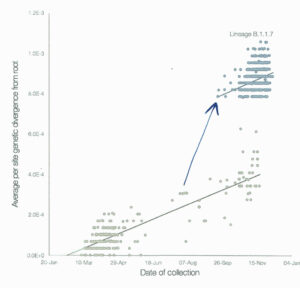 Genetic evolution of the B.1.1.7 strain

For all of those virologists who said at the beginning of the pandemic that this coronavirus is unlikely to significantly mutate, this mechanism should be a cautionary tale.

The bad news starts with the implications of these genetic changes. Researchers at Imperial College in London undertook a very extensive analysis of the introduction of the b.1.1.7 strain and found that it increases the basic reproduction number (R0) between 0.4 and 0.7. This is very significant considering current effective reproductive numbers (Re) in different geographic regions of something like 0.8-1.5. Within 2 months this new strain is likely to become dominant in any geographic area in which transmission is not seriously inhibited (like the USA).

There’s also another piece of bad news. This strain may also be associated with higher viral loads. The evidence comes from PCR testing in the UK. To understand the nature of the evidence we first have to take a brief detour to understand how a PCR test works, particularly a parameter called the cycle threshold (Ct). The following information is abstracted from the Public health Department in Ontario, Canada.

“The Ct value is defined as the number of cycles of amplification (using rRT-PCR) required for the fluorescence of a PCR product (i.e. the target/amplicon) to be detected crossing a threshold, which is above the background signal (a low level signal that is present in the assay regardless of whether target is present). When rRT-PCR is performed, a predetermined number of cycles (rounds) of amplification of target (e.g. SARS-CoV-2) nucleic acid occur. If target is present in the specimen then each round of amplification results in a doubling of the amount of target present. As a result, amplification occurs exponentially, producing an exponential curve of amplification. This exponential amplification is visualized by the use of a fluorescent nucleic acid probe. Probes are fluorescently labelled DNA oligonucleotides, which bind to the target. As amplification proceeds, more target becomes available for binding by the fluorescent probe, increasing the fluorescent signal. In general, the amount of fluorescent signal observed increases as amplification proceeds and is proportional to the amount of target present in the specimen. Amplification is considered significant, and equates with “detection” of target, if the threshold of fluorescence is reached. The threshold of fluorescence is usually set at the midpoint of the exponential phase of amplification of the positive control included in the assay run. The positive control is typically a previously characterized positive clinical specimen, inactivated virus culture, or viral nucleic acid. If positive control material is limited, synthetic RNA sequence, identical to the target region of the virus, is used as an alternative. A vertical line (see blue dashed lines in Figure 2) is orthogonally dropped from the point where the amplification curve crosses the threshold to where it meets the X axis of the graph, corresponding to the Ct value. The Ct value is essentially the number cycles of doubling amplification at which target detection has occurred.” 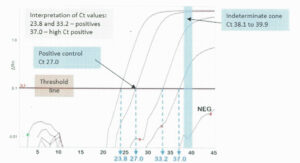 From Figure 2 you can see that to count as a positive test the Ct value should be between 23.8 and 37. That’s our “Goldilocks zone.” Although PCR testing is qualitative it can be made quantitative if you have calibrated samples of a virus (i.e., number of copies per mL). Most importantly, higher viral loads will mean lower Ct values. Still with me? Let’s go back to the UK data then.

According to the UK data a Ct value of approximately 15-16 corresponded to a viral load of 1 x 106 copies per mL. In their observed cluster of B1.1.17 samples at Ct <15 this corresponded to 35% of individuals having between 10 and 10,000-fold greater than 1 x 106, compared to 10% of other strain samples. In other words, a significant fraction of those individuals infected with the B1.1.7 strain had a much higher viral load. Now, we don’t know what this will mean exactly in terms of our USA context, but we do know that based on a prior observational study: “SARS-CoV-2 viral loads, especially within plasma, are associated with systemic inflammation, disease progression, and increased risk of death.”

Projections Through the End of June 2021
I tried very hard to model various possibilities using a SEIRS approach but the sheer number of unknowns and combinations of variables made it impossible to select an appropriate model. So, I resorted to a simpler empirical mathematical approach taking into account the recent changes in hospitalizations and associated mortality rates based on the past 30 days, the R0 of the B1.1.7 strain plus a virulence factor associated with possible higher viral loading, the timeline for dominance of the B1.1.7 strain and a relatively slow vaccination rate due to so many healthcare workers refusing to be vaccinated (100 million people vaccinated by the end of June), and assuming an overall 85% efficacy (i.e., not prolonging the recommended interval between doses for 2-dose vaccines). I made no adjustments for seasonal changes or additional deaths due to isolated healthcare system collapses. So, Figure 3 probably represents a worst-case scenario and does not include deaths due to “collateral damage.” By the end of June, we could be looking at a cumulative death toll of 900,000. I say probably, because I am not convinced that the level of stupidity in this country will get any better and could get worse. Just look at the situation in the UK, which is dire, and they are already under a complete lockdown—something we would never do in this country. 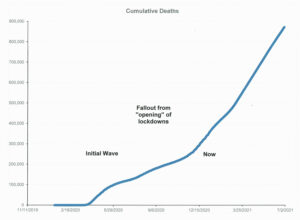 Projected deaths due to SARS-Cov2 through June 2021.

If for some reason the B1.1.7 strain doesn’t become dominant here, or takes much longer to become dominant, and/or more people are vaccinated and we do a better job of infection prevention, the cumulative death toll by the end of June 2021 could be less, perhaps around 550,000-600,000, and we’ll see a leveling off of the mortality rate curve.

These are very dark times and the vaccines represent the light. I know many of you, especially on the front lines are reticent about getting a vaccine. Sadly, social media and news have mostly focused on events that are in fact perfectly normal when millions are being vaccinated. Severe adverse events (e.g., allergies) to date for the mRNA-based vaccines have been actually rare and in line with other vaccines. I can’t speak to some of the vaccines developed in other countries (e.g., India and China) because detailed data on those vaccines haven’t been published. The sooner we are all vaccinated, the faster we will all get a break. The longer it takes, the harder it will get especially for those of you on the front lines. For those of you who know me, you know I am passionate about my work, about saving lives, and one of the reasons I write these blogs is to keep you informed. Another reason, right now is that if I can just convince one of you to take the vaccine then it will have been worth writing this post.

Cost-effectiveness Modeling of CTPs: The story Behind the Story